"Truth: Liquid calories are more conducive to weight gain than solid calories, because the human body doesn’t compensate by reducing calorie intake later in the day. 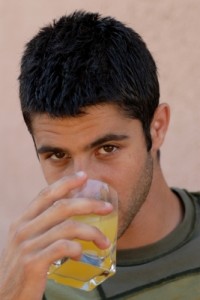 Truth: Sugary drinks are the single-largest source of calories in the American diet, providing an average of about 7 percent of total calories per person, and that average includes all the people who rarely drink them. The percentage of calories from sugary drinks is much higher for people who consume them often—such as several times a day.

Truth: Most sugary drinks are devoid of nutrition—vitamins, minerals, protein, or fiber—and contain only empty calories.

Truth: It would take the average adult over one hour of walking to burn off the 240 calories in a 20-ounce Coke.

Truth: Americans consume about 38 pounds of sugar from sugary drinks each year.

Lie "At The Coca-Cola Company, we know our business can only be as strong and sustainable and healthy as the communities we serve."  – Muhtar Kent, Coca-Cola Chairman and CEO

Truth: If communities were healthier, Coca-Cola Co. would  be selling a lot fewer Cokes. The tripling of sugary carbonated drink consumption since the mid-1950s is one of the major causes of obesity.

Truth: Between 20% and 50% of the approximately 300 calories Americans have added to their diets in the past 30 years is attributable to increasing sugary drink consumption, now at
an average of 178 calories for men and 103 calories for women per day.

Truth: Coca-Cola plans to spend more than $21 billion over the next five years to expand its business in just four countries: China, India, Brazil, and Mexico—which will undermine the health of "the communities we serve."

Truth: When Congress was considering a soda tax to help pay for health-care reform and improve the health of communities, Big Soda increased its lobbying expenses by 3,000% over the 2005 levels.

Truth: Big Soda gives generously to community groups, organizations of public officials, minority groups, and medical and health groups to influence policy positions and discourage criticism of the companies for undermining the health of communities. It often "changes the conversation" by focusing on building playgrounds and encouraging physical activity.

Lie "[O]ur member companies do not advertise beverages other than juice, water or milk-based drinks to any audience that is comprised predominantly of children under 12…" – American Beverage Association

Truth: Not only do children under 12 see Coke and Pepsi logos everywhere, but Coca-Cola Co. promotes its products heavily at Disneyland, on American Idol, and on telecasts of the Olympics, all of which are seen by huge numbers of young children. Also, they sell kids’ tee-shirts, toys, games, and stuffed animals with Coca-Cola logos at its web store, and the company licenses similar kid-friendly products at Toys "R" Us, and elsewhere. "

" Truth: Far too many people do rely too much on soft drinks for their calories. Sugary drinks’ empty calories displace healthier foods, and Americans already consume hundreds more calories per day on average than they did 30 years ago.

Truth: Two-thirds of American adults and one-third of children are overweight or obese.