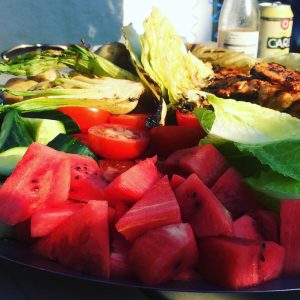 “Celiac disease is an autoimmune disease initiated by an allergic reaction to gliadin a component of the protein gluten that is found in wheat and other grains. Vitamin D is a prohormone with a number of biochemical functions including immunomodulatory functions in its active form. Supplementation with large doses of vitamin D induces symptoms that are similar to celiac disease in some of the population. Some researchers have noted that consumption of large doses of oral vitamin D early in life is associated with increased incidence of allergic diseases later in life. An examination of celiac disease suggests that an allergy is fundamental to its development and it features Th2 cytokine elevations which typically characterize allergic diseases. In addition it has comorbidity with allergic diseases where exposure to large doses of vitamin D early in life is a risk factor. This raises the possibility that large doses of vitamin D early in life could be a risk factor for inducing celiac disease later in life as well. The comorbidity between Williams syndrome, which is characterized by spikes in blood levels of vitamin D, and celiac disease gives additional credence to this hypothesis. Epidemiological evidence supports this hypothesis as well. Vitamin D consumption among the young and celiac disease prevalence are high in Sweden, Finland, and the United States. Vitamin D consumption among the young and celiac disease prevalence are low in Russia and Germany. The timing of the increases in prevalence in the United States and Sweden also coincides with increasing vitamin D consumption. This is most striking in Sweden where a law required significant vitamin D fortification of food starting in 1983 and the start of the celiac epidemic in Sweden has been independently dated from 1984. This hypothesis also provides a potential explanation for some seemingly contradictory results in the literature regarding breastfeeding and risk of celiac disease.”